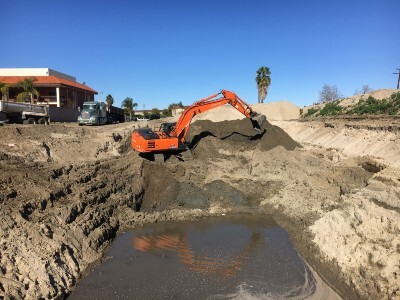 CSC conducted oversight of excavation and removal of soils affected by petroleum hydrocarbons at a four-acre property in Santa Ana, California. In 2016 during grading for redevelopment with multi-family residential land use, petroleum hydrocarbons were discovered by the developer’s project contractor. Visibly impacted soil was excavated and staged in a stockpile. One soil sample was collected from the excavation bottom at a depth of 15 feet by the geotechnical engineer, which indicated that contamination consisted of gasoline-range total petroleum hydrocarbons (TPH-g) and fuel related volatile organic compounds (VOCs).

CSC was contracted to monitor VOC vapors in accordance with South Coast Air Quality Management District (SCAQMD) Rule 1166 and to oversee further excavation. Prior to commencing additional excavation, additional assessment of extent of impacts was performed by excavating seven potholes around the perimeter of the existing excavation and supplemental sample collection. Gasoline-range hydrocarbons and VOCs were detected in three of the seven sample locations at the north end of the excavation pit.

The excavation boundaries were enlarged in late 2016/early 2017 to address remaining affected soils identified. Final size was approximately 70 by 100 feet, and extended to a depth of 19 feet, where groundwater was encountered. Approximately 3,200 cubic yards of soils were removed and disposed of offsite as non-hazardous waste. CSC collected 73 confirmation samples from four depths along sidewalls and bottom of the excavation, and additional samples from eight additional potholes around the excavation perimeter. Confirmation sample results demonstrated all significantly affected soil had been removed. The excavation was backfilled with engineered fill and construction resumed.

In 2018, CSC collected verification samples of soil, soil vapor, and groundwater from five direct push borings placed around the limits of the former excavation, extending to a depth of 20 feet. A parking structure serving the multiple home development had been constructed above the former excavation by this time that limited accessibility of drill rigs. Well permits were obtained from the Orange County Health Care Agency, Environmental Health Division (HCA). Underground Services Alert was notified to mark utilities and a geophysical survey was conducted to clear each drilling location.

Soil samples were collected at five-foot depth intervals and groundwater grab samples were collected at the bottom of each boring. Soil samples at 15 and 20 feet were retained for analysis and analyzed for VOCs, TPH-g, as well as TPH in diesel and motor oil carbon chain ranges (TPH-d and TPH-mo). Sample aliquots for VOC and TPH-g were prepared in accordance with EPA Method 5035. Groundwater samples were analyzed for the same suite as the soil samples. In addition, soil vapor probes were constructed at depths of 5 and 17 feet within the borings and sampled for VOCs and TPH-g.

Remnant hydrocarbon (including VOC) contaminants in soil confirmation and verification samples were determined to be insignificant, i.e., below screening levels for direct exposure and no observed impact to groundwater. Soil vapor detections were not considered significant, as non-detect results for 5-foot samples indicated that vapors were not migrating toward the surface and therefore, it was concluded that vapor intrusion risk is unlikely from any of the identified potential sources.

For over 20 years, Clark Seif Clark’s highly qualified Team has been providing a broad range of hazardous materials and health & safety compliance professional services to resolve complex environmental issues.  The cornerstone of our ability to meet client goals and objectives is our commitment to Value Engineering.  Our staff is highly motivated and successful at providing the most cost-effective approach when conducting environmental surveys; performing hazard assessments; preparing remediation and abatement work plans; and representing our client’s  best interests when providing field oversight of third-party contractors to ensure the quality of their work and conducting negotiations with regulatory authorities.

Contact us to learn how we can identify the best solution to your environmental concerns.

COVID-19: Assisting Clients with Strategies for the New Realities